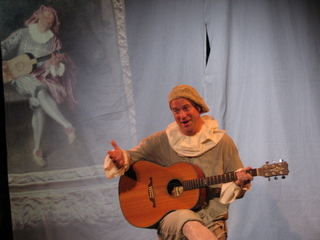 PLEASE CLICK HERE to see the TWO ACT SCENE BREAKDOWN PLUS THE 50+ FAMOUS PAINTINGS AND WORKS OF ART THIS PLAY IS BASED ON!

PLEASE CLICK HERE to see THE TWO ACT SCENE BREAKDOWN PLUS THE 50+ FAMOUS PAINTINGS AND WORKS OF ART THIS PLAY IS BASED ON!

Click here to link to Samuel French INC for EXHIBIT THIS! - THE MUSEUM COMEDIES which is now published.

CLICK HERE to link to SmartTix.com for TICKETS** Discount code: THIS (This is the advance sale discount ticket at $15 through SmartTix.com)
**Click here for MEMPHIS PLAYHOUSE IN THE SQUARE review** (35 KB) 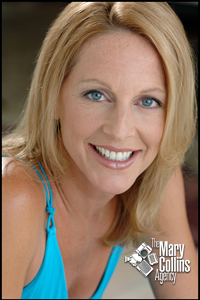 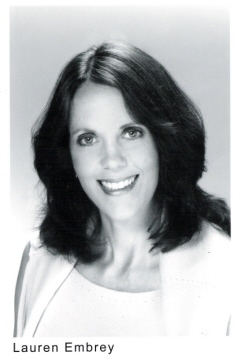 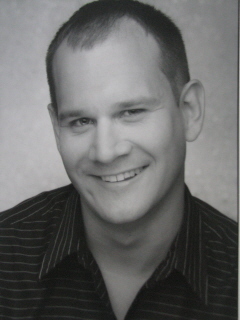 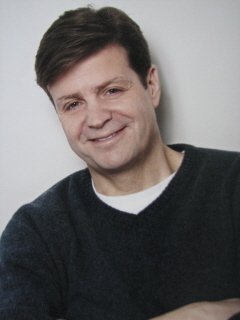 This article by LucyAnn Dunlap was prepared for the July 13, 2005 issue of U.S. 1 Newspaper. All rights reserved.

A Play Where Art Imitates Art


This page is published by PrincetonInfo.com -- the web site for U.S. 1 Newspaper in Princeton, New Jersey.

PLEASE CLICK HERE TO SEE The 50 + Famous Paintings and Works of art that this play is based on!

A fast-paced series of 7 comedic plays, 6 monologues
based on 50+ works of Art at the MET.

What happens when paintings, sculpture, antiquities, drawing, and fertility gods, emerge from their frames?
***
Mix in artists, guards, lovers, curators and one very special night, and you have...EXHIBIT THIS! - THE MUSEUM COMEDIES.

7 One Acts & 6 Monologues.
*
Excellent tournament plays!
*
"The #1 Pick of New York Magazine"
*
"The appreciation of Art through the use of Comedy is a perfect cross-curricular blend." - Janice Baldwin, Stuart Country Day School of the Sacred Heart, Princeton, NJ
*
"It revived our summer theatre program and sold out every performance!"- Michael Gallagher, The Peddie School, Hightstown, NJ
*
"Plenty of plays on words and contemporary references that add humor and a twist." - NYTheatre.com
*
"The work suddenly elevates from its warm, romantic frame to a profound philosophical thought."- OOBR.com
*
The Perry Award for best play in New Jersey Theatre from NJTheater.com

The Perry Award in New Jersey Theatre for Production of Best Original Play: EXHIBIT THIS! THE MUSEUM COMEDIES Presented to The Peddie Players & Robert Rund the show's Producer - Presented by NJTHEATER.com

THE NEW YORK CITY CAST(See below for individual pictures) 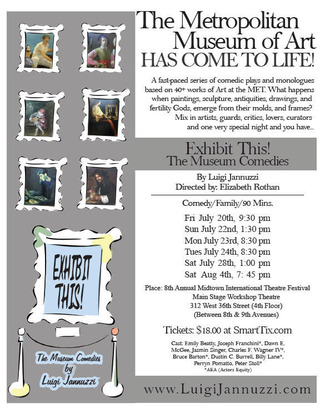 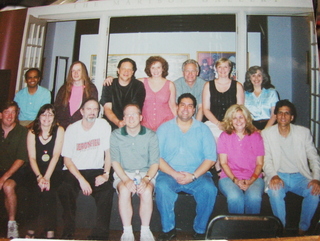 Synopsis of: EXHIBIT THIS! - THE MUSEUM COMEDIES

What happens when a museum comes to life?

What happens when paintings, sculpture, antiquities, drawing, and photography,¼emerge from their molds, and frames?

Mix in some artists, guards, critics, lovers, curators and one very special night, and you have,...

EXHIBIT THIS! -- THE MUSEUM COMEDIES

Set in The Metropolitan Museum Of Art

Did we mention it's in 2 acts?

All performed on a bare set with props.

So if you love comedies and museums.

"EXHIBIT THIS! -- THE MUSEUM COMEDIES!"

What's the furthest production? Probably: The New York Metropolitan Museum of Art came to life at the Rene C. Henderson Auditorium on April 30, May 1, and May 2.
Kenai Central High School presented its spring drama production of Exhibit This! The Museum Comedies by Luigi Jannuzzi.
Directed by Cheri Johnson. (Kenai is about 3 hours along the coast and through the mountains from Anchorage, Alaska. Check out the pictures of the terrific fishing in the area on the news article. Giant fish.)