Want this play? Clicking here links to the publisher: SAMUELFRENCH.com
*CLICK HERE TO READ* a free sample of "NIGHT OF THE FOOLISH MOON"

CLICK HERE TO CHECK OUT THE CANADIAN PRODUCTION OFNIGHT OF THE FOOLISH MOONin British Columbia, Canada May 2007. Night of the Foolish MoonA romantic comedy by Luigi JannuzziDirected by George Kopfafter a succesful run fromMarch 1 - 24, 2007was produced at British Columbia's Greater Vancouver Festival May 2007 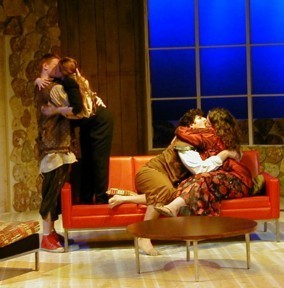 The Theatre Department of Ohio University Eastern Campus will present Night of the Foolish Moon, a new romantic comedy by Luigi Jannuzzi, May 8-10 and 15-17, each evening at 8pm.Night of the Foolish Moon is the story of Roger, a hopeless and hapless romantic searching for a grand quest in life. Roger spends most of his time semi-detached from reality, until a time warp opens in the living room transporting Don Quixote and Sancho Panza into the present. Enter a young woman named Bernadette, a star witness in a mod murder trial, who's looking for a hideout. Roger decides to make Bernadette his quest and renames her Destiny, to her surprise. The ensuing misunderstandings coupled with cosmic happenings make for a hilarious evening of theatre.OUE Theatre Director Dennis Fox describes the script as "funny and fresh--the story is familiar but it's told in an off-beat, quirky way--an interesting new script from an up-and-coming playwright. It's very different. This type of comedy is exactly the way we like to end the season--with lots of laughs."The talented OUE cast includes Patrick Kearns, of Wheeling, as Roger. Patrick is a Jinior at Wheeling Park High School and was last seen at OUE in Trophies. In the role of Bernadette is Debbi J. McMillan, of Dillonvale. Debi was last seen as Mary Warren in The Crucible. Playing Victoria is Megan Simcox, of Martins Ferry--Megan was last seen as Abigail in The Crucible. In the role of Sancho Panza is Chris T. Link, of Bridgeport. Chris is a Senior at St. John's and was last seen as Thomas Putnam in The Crucible. Playing Mother is Kaitlin Vitchner, of Martins Ferry. Kaitlin was last seen as Tituba in The Crucible. In the role of Don Quixote is Steven Zamouzakis, of Belmont. Steve was last seen as Giles Corey in The Crucible.OUE Theatre will present Luigi Jannuzzi's romantic comedy Night of the Foolish Moon on May 8, 9, 10 and 15, 16, and 17, each evening at 8pm in the Shannon Hall Theater. Thursday evenings are Audience Appreciation Nights with all seats priced at $3. Friday and Saturday evenings General Admission is $6 with Senior Citizen and Student tickets priced at $3. For more information and to make reservations call Ohio University Eastern at 740 695 1720.Close this window to return to the OUE Theatre page 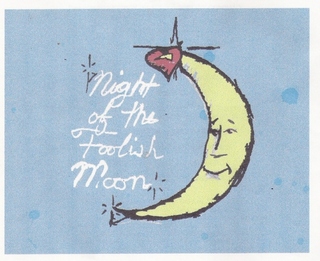 Roger, a man obsessed with Don Quixote, falls in love with a witness in a murder trial. She is running for her life and seeks refuge at a beach house belonging to the district attorney, Roger's brother. Meanwhile, Sancho Panza breaks through a time warp to bring Roger the quest he has longed for. Coincidentally, Roger's mother is trying to cast Man of La Mancha for the local theater. Sancho comes to her aid and romance blossoms. 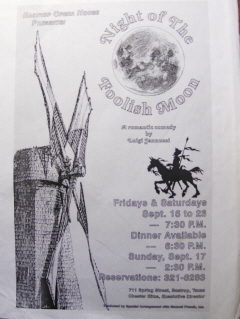 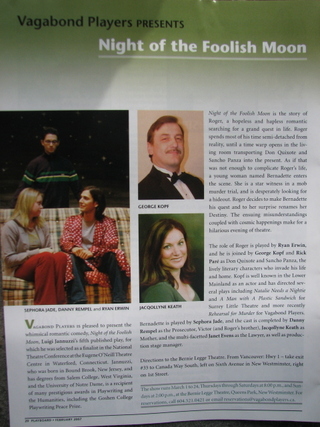 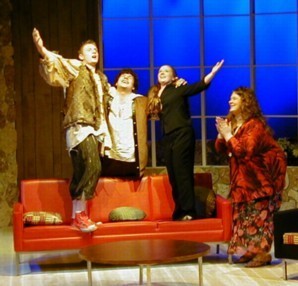 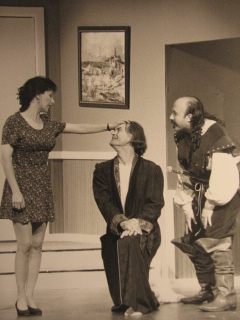 Roger knighted by Bernadette.*The following pictures are from The Villagers Theatre, Somerset, NJ 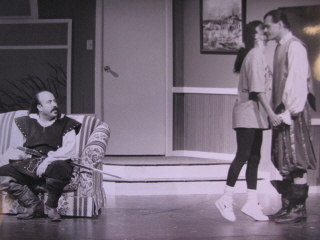 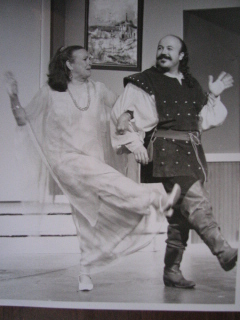 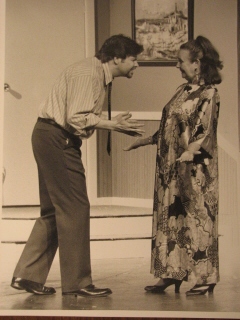 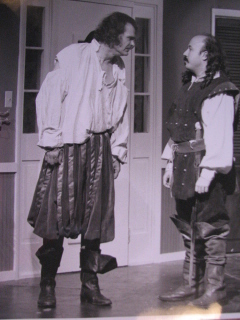